Born With Half a Brain, Woman Living Full Life 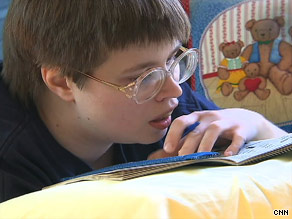 The right side of Michelle Mack's brain rewired itself to take over functions controlled by the left.

Born with only half a brain, Mack can speak normally, graduated from high school and has an uncanny knack for dates.

At 27, doctors determined that the right side of her brain had essentially rewired itself to make up for function that was likely lost during pre-birth stroke. But her childhood and young adult years were fraught with frustration.

Mack's parents, Carol and Wally, realized shortly after her birth that something was wrong.

Ten years ago, Dr. Jordan Grafman, chief of the Cognitive Neuroscience Section at the National Institutes of Health, finally diagnosed the problem. Watch how Mack's brain healed itself »

An MRI scan revealed she was missing nearly half of the left side of her brain. While it was clear Mack has some problems, Grafman said he and the family were shocked by the extent of the damage.

The only answer, Grafman said, was that Mack's brain has rewired itself. The remaining half took over some of the essential functions that are normally done by the left, such as speaking and reading. That rewiring, however, came at a cost.

"It's quite possible that in her learning, in her development, when the right hemisphere either took over or developed some of the language abilities that it cost her in some of the skills that are normally mediated by the right side of the brain," added Grafman.

In the 10 years since Grafman first diagnosed Mack, she has seen some intellectual functions improve, the doctor said. Recovery has not been perfect, however. Mack still struggles with abstract concepts and becomes easily lost in unfamiliar surroundings.

The diagnosis explained why Mack had experienced a lifetime of difficulty controlling her emotions.

"He's helped us understand the reason why I tend to throw fits, temper tantrums," she said. "It was because I was missing half my brain."

Mack will always have some problems, but dad Wally Mack said that Grafman's diagnosis and treatment answered a lot of questions and gave him hope.

"Dr. Grafman explained that the right hemisphere is taking over, and it might take her a little while longer to get there with all the rewiring that has to take place," he said. "But that told us all these bad days are behind us and there are nothing but good days ahead."

Michelle Mack is now 37 and lives with her mother and father. She works from home doing data entry for her church. She is fairly independent, pays rent and can do most household chores. She realizes she'll need help for the rest of her life but wanted to tell her story to make it clear that she is not helpless.

"I wanted to do this so people like producers, photographers and security guards and police officers learn about people like me," she said, "that I'm normal but have special needs, and that there are a lot people like me, so that they could be more understanding."