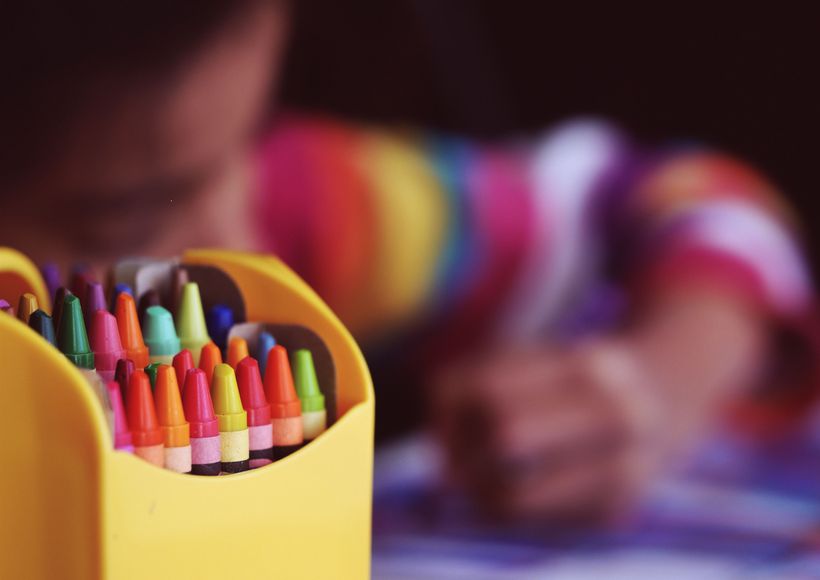 We are in a day in age where we’re measured by our achievements. And this measurement isn’t lost on our children. Society is so worried about their kids succeeding. We’re worried about test scores, learning sooner, learning faster, and achieving the most. Without a doubt success has its place. But, is it possible that in the process of being so focused on achievement we’re forgetting all about the importance of creativity. And more importantly how to develop that creativity early in kids lives.

Don’t get me wrong I want my children to achieve and be successful just as much as the next parent. But, I think how early we force that on our children is worth rethinking. Instead I think we should focus more on letting our kids explore the world around them while encouraging creativity. Early development of creativity is much more important than we think it is.

Creativity can be defined as imagination or original ideas, especially in the production of an artistic work. That is the traditional thought of creativity, but, creativity is so much more than that. It is quite literally essential to everything that we do to be successful. Christine Carter of UC Berkeley says, “creativity helps us deal with change, problem solving, affects our social and emotional intelligence, enhances our understanding of math and science, and is a key component to health and happiness.” You see what I mean, everything!

Can Developing Creativity Help Your Child Reach Their Giftedness Potential?

As you’ve seen above there’s so many things creativity can influence in your children’s lives. It doesn’t stop there, though. I know we’ve all grown up thinking that if a person is gifted they are born that way. But, the evidence these days suggest that that is just not true. Benjamin Bloom has found that parent’s support and guidance of a child’s curiosity, as well as, supporting them in the things that they enjoy are by far more often an indicator of future success than anything else.

So, what does this mean? In simple terms it means exposing our children to things that help them explore their curiosity and creativity stimulates their gifted potential. The thought is that if creativity is developed at an early age parents can help children reach their gifted potential. If you’re curious whether your child is gifted, you can learn more about assessing your children here.

How to Foster Creativity

Creativity is typically not something that children are born with. While, that definitely happens, more times than not, a child’s creativity has been developed through his or her parents. Let’s talk about a few ways we can foster creativity.

This is probably one of the easiest ways to encourage creativity! When my daughter and I walk to the park I ask her a million and one questions. She probably hates me for this now but she’ll thank me when she’s a genius later in life. Haha! But, seriously. Ask them the color of the sky. Ask them if they see any birds. Why are there trees? What is their favorite color and why? You get the idea. Obviously, these questions will be dependent on your child’s age but the goal is to get them to think about the world around them and use their imagination.

2. Free Time and Time to be Bored

I’m not sure when we decided as a society every single moment of our children lives needed to be filled with some sort of activity. Look, my kids love being in a activity just as much as others. But, around here we keep it to 1-2 activities per child. It’s so important to me that my children have down time and time to be bored. This time is actually really important because it allows children the chance to explore and wonder on their own. And use their imagination. Which, as we talked about, is super important to fostering creativity.

3. Create a Space to Get Creative

This one is important because this allows kids to tap into their imaginations. And, before you tell me you don’t have the space let’s talk about it. If you can’t dedicate a whole room to it, don’t even worry. A small corner in a room or even a just box full of goodies works just as well. It’s not about the space. It’s more about what’s in the space. Fill the area with things the kids can dress up in, pretend with, explore with, and express themselves with. Some ideas for this are; old clothes to be used as dress up clothes, objects they can play pretend with, legos, art supplies, etc.

4. Try Not to Reward Your Kids For Achievement

I know, this one sounds crazy. Obviously, we want to cheer on our kids achievements. But, I think it’s more important that we talk to our kids about the steps they took that allowed them to achieve. Ask them what obstacles they faced and how they navigated through them. Ask them what they learned through this achievement. Or ask them what they liked or didn’t like about the process. I think that by doing this we allow our kids to think through what it takes to accomplish a goal, how to do it better next time, and to really decide if they liked the activity they were doing.

This can be a hard one for many parents, myself included. But, letting children work through “stuff” on their own is truly worth it. Instead of us stepping in and solving problems for them, they are forced to learn how to problem solve on their own. Which in turn forces them to tap into their creativity to figure out what to do in certain situations. Take a step back and give your kids the chance to figure out what they want, how they want to do things, or how they want to solve problems.

“As your kids get older, ask them how they approach certain problems and how they might do things differently,” says Margarita Tartakovsky of Psych Central. One of my favorite ways to encourage critical thinking is through looking at everything with a scientific process lens. Before you begin a task/project/game ask them what they think the outcome will be? And when you ask them this question don’t interrupt. Let them fully think it through without you guiding their answer. Then once you’re done with what you were doing, ask them about the outcome, and compare it to what they thought would happen. This can be as simple as jumping over a puddle or as complex as actually doing science projects.

Here’s a few other ideas to help you encourage critical thinking in your children: Ask them how things work and why things work the way they do. Ask them about cause and effect. Encourage them to think things through.