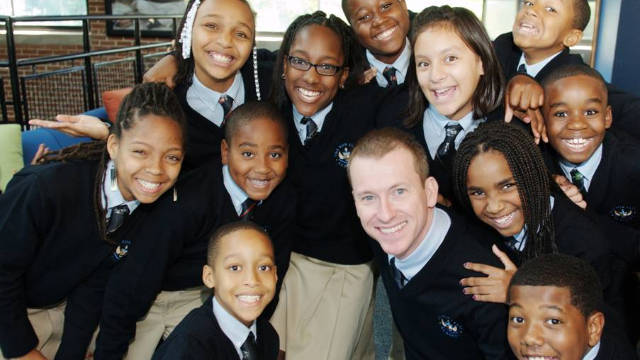 Teacher Ron Clark is pictured with his students.

Editor's note: Ron Clark, author of "The End of Molasses Classes: Getting Our Kids Unstuck -- 101 Extra... has been named "American Teacher of the Year" by Disney and was Oprah Winfrey's pick as her "Phenomenal Man." He founded The Ron Clark Academy, which educators from around the world have visited to learn.

(CNN) -- This summer, I met a principal who was recently named as the administrator of the year in her state. She was loved and adored by all, but she told me she was leaving the profession.

I screamed, "You can't leave us," and she quite bluntly replied, "Look, if I get an offer to lead a school system of orphans, I will be all over it, but I just can't deal with parents anymore; they are killing us."

Unfortunately, this sentiment seems to be becoming more and more prevalent. Today, new teachers remain in our profession an average of just 4.5 years, and many of them list "issues with parents" as one of their reasons for throwing in the towel. Word is spreading, and the more negativity teachers receive from parents, the harder it becomes to recruit the best and the brightest out of colleges.

So, what can we do to stem the tide? What do teachers really need parents to understand?

For starters, we are educators, not nannies. We are educated professionals who work with kids every day and often see your child in a different light than you do. If we give you advice, don't fight it. Take it, and digest it in the same way you would consider advice from a doctor or lawyer. I have become used to some parents who just don't want to hear anything negative about their child, but sometimes if you're willing to take early warning advice to heart, it can help you head off an issue that could become much greater in the future.

Trust us. At times when I tell parents that their child has been a behavior problem, I can almost see the hairs rise on their backs. They are ready to fight and defend their child, and it is exhausting. One of my biggest pet peeves is when I tell a mom something her son did and she turns, looks at him and asks, "Is that true?" Well, of course it's true. I just told you. And please don't ask whether a classmate can confirm what happened or whether another teacher might have been present. It only demeans teachers and weakens the partnership between teacher and parent.

Please quit with all the excuses

The truth is, a lot of times it's the bad teachers who give the easiest grades, because they know by giving good grades everyone will leave them alone.
Ron Clark

And if you really want to help your children be successful, stop making excuses for them. I was talking with a parent and her son about his summer reading assignments. He told me he hadn't started, and I let him know I was extremely disappointed because school starts in two weeks.

His mother chimed in and told me that it had been a horrible summer for them because of family issues they'd been through in July. I said I was so sorry, but I couldn't help but point out that the assignments were given in May. She quickly added that she was allowing her child some "fun time" during the summer before getting back to work in July and that it wasn't his fault the work wasn't complete.

Can you feel my pain?

Some parents will make excuses regardless of the situation, and they are raising children who will grow into adults who turn toward excuses and do not create a strong work ethic. If you don't want your child to end up 25 and jobless, sitting on your couch eating potato chips, then stop making excuses for why they aren't succeeding. Instead, focus on finding solutions.

Parents, be a partner instead of a prosecutor

And parents, you know, it's OK for your child to get in trouble sometimes. It builds character and teaches life lessons. As teachers, we are vexed by those parents who stand in the way of those lessons; we call them helicopter parents because they want to swoop in and save their child every time something goes wrong. If we give a child a 79 on a project, then that is what the child deserves. Don't set up a time to meet with me to negotiate extra credit for an 80. It's a 79, regardless of whether you think it should be a B+.

This one may be hard to accept, but you shouldn't assume that because your child makes straight A's that he/she is getting a good education. The truth is, a lot of times it's the bad teachers who give the easiest grades, because they know by giving good grades everyone will leave them alone. Parents will say, "My child has a great teacher! He made all A's this year!"

Wow. Come on now. In all honesty, it's usually the best teachers who are giving the lowest grades, because they are raising expectations. Yet, when your children receive low scores you want to complain and head to the principal's office.

Please, take a step back and get a good look at the landscape. Before you challenge those low grades you feel the teacher has "given" your child, you might need to realize your child "earned" those grades and that the teacher you are complaining about is actually the one that is providing the best education.

And please, be a partner instead of a prosecutor. I had a child cheat on a test, and his parents threatened to call a lawyer because I was labeling him a criminal. I know that sounds crazy, but principals all across the country are telling me that more and more lawyers are accompanying parents for school meetings dealing with their children.

I feel so sorry for administrators and teachers these days whose hands are completely tied. In many ways, we live in fear of what will happen next. We walk on eggshells in a watered-down education system where teachers lack the courage to be honest and speak their minds. If they make a slight mistake, it can become a major disaster.

My mom just told me a child at a local school wrote on his face with a permanent marker. The teacher tried to get it off with a wash cloth, and it left a red mark on the side of his face. The parent called the media, and the teacher lost her job. My mom, my very own mother, said, "Can you believe that woman did that?"

I felt hit in the gut. I honestly would have probably tried to get the mark off as well. To think that we might lose our jobs over something so minor is scary. Why would anyone want to enter our profession? If our teachers continue to feel threatened and scared, you will rob our schools of our best and handcuff our efforts to recruit tomorrow's outstanding educators.

Finally, deal with negative situations in a professional manner.

If your child said something happened in the classroom that concerns you, ask to meet with the teacher and approach the situation by saying, "I wanted to let you know something my child said took place in your class, because I know that children can exaggerate and that there are always two sides to every story. I was hoping you could shed some light for me." If you aren't happy with the result, then take your concerns to the principal, but above all else, never talk negatively about a teacher in front of your child. If he knows you don't respect her, he won't either, and that will lead to a whole host of new problems.

We know you love your children. We love them, too. We just ask -- and beg of you -- to trust us, support us and work with the system, not against it. We need you to have our backs, and we need you to give us the respect we deserve. Lift us up and make us feel appreciated, and we will work even harder to give your child the best education possible.

That's a teacher's promise, from me to you.