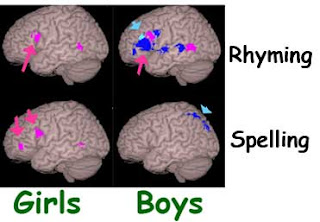 Here's an interesting studylooking at the different ways boys and girls process language. At almost every age, girls trump the boys in terms of language performance, but the surprising finding in this study was that strong performances were activated by different brain regions depending on gender. The implications? -boys and girls are wired to learn language differently. Among the strong language performers who were girls, fMRI activations were highest in "conventional" language areas such as the left inferior frontal gyrus or left middle temporal gyrus. Among the strong language performers who were boys, however, the highest brain activation areas were visual association and imagery areas if words were presented visually or sound association (phonology) areas if the words were presented aurally.

Excerpt: "The pattern of accuracy correlations suggests that girls’ linguistic judgments depended on information available to the language network regardless of the modality of word presentation, whereas accurate performance for boys depended on the modality of word presentation rather than the linguistic judgment required. These dramatic sex differences in the pattern of brain-behavior correlations reflect fundamental differences in the nature of processing required for accurate performance." Whereas girls are processing words within the brain's language networks, boys' processing is more associational and link tied to the mode in which words are presented (e.g. by sight vs. sound).

The boys data is particularly interesting for the dyslexic boys we see. We've noticed that they are able to better remember sight spelling words like through if they are pictured with a doodle that reinforces the unusual part of spelling as well as its meaning.